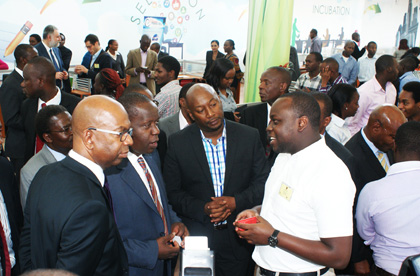 In a well-organized and elegant manner, the @iLabAfrica Research and Innovation Center at Strathmore University was officially launched in the presence of leading industry technology personalities and partners on the 19th June 2014.

The research Center under the Faculty of Information and Technology at Strathmore University was established to spearhead ICT Research, Innovation and Entrepreneurship with a mission of providing an environment that promotes technology innovation and business support structure and policy. Under this Center is also @iBizAfrica, a business incubator where young entrepreneurs are nurtured to grow their businesses, skills and ideas through various support structures.

In his warm opening remarks, Director of @iLabAfrica Dr. Joseph Sevilla explained his passion and the reason behind founding of @iLabAfrica, “One of my greatest frustrations is seeing young people with great ideas and they can’t do anything with them.” Dr. Sevilla and a young team of energetic innovators from the Faculty of IT started the center three years ago. @iLabAfrica has now come of age as a research and innovation hub of great reputation in Kenya and Africa.

Over the years, the Centre has curved a niche in developing technological skills and promoting youth entrepreneurship through business incubation. Projects have been implemented with high social and economic impact building human capacity in various sectors of the economy.

Stating how proud he was of the key ICT industry players supporting this innovation centre, which has created an opportunity for students to know what is expected in industry so as to achieve the global standards of the marketplace, Professor John Odhiambo, the VC of Strathmore University commended the partners and the team for believing in the Strathmore vision for innovation. He also emphasized on the fact that the students are trained not to look for jobs, but to create jobs for others.

Representing Samsung, Ms Patricia King’ori stressed the fact that the opening of this facility signified commitment from all partners who are investing in research and development. She added that out of the 82 apps that have developed in the Samsung-Strathmore research lab so far, 62 are already in use in the market.

Eng. Victor Kyalo, CEO Kenya ICT Authority encouraged ICT industry players to support innovation hubs , adding that it is important to develop ICT and ensure that it is contributing to the economy. He further said that it is time the youth started to wining as drivers of innovation to drive development in Kenya.

In a bid to cub unemployment and lack of skills in ICT in Africa, Safaricom has to date invested KES 30 million in the Safaricom Academy and the @iBizAfrica business incubator, giving Strathmore the ability to ignite the potential of new and creative innovators. “What you do at Strathmore is more than create jobs, you are creating useful people to the society,” Mr. Bob Collymore- Safaricom CEO said.

The key sponsors of the vibrant research center were awarded during the ceremony. @iLabAfrica has attracted sponsorship from leading IT companies globally and locally. The main industry partners working with @iLabAfrica include Safaricom, Samsung, Ericsson, Oracle, IBM and Intel.

Cabinet Secretary Dr. Fred Matiang’i in his keynote address explained the role of the government in ICT which is to grow, sustain and support development skills. Appealing to industry and academia to work together with the public sector, Dr Matiang’i hopes that such partnerships will drive more research and innovations in universities in Kenya. The speeches came to an end in style as the audience was treated to heavenly choral music by the Strathmore Chorale, the award winning choir at Strathmore University.

The next order of business for the day was unveiling of the plaque and cutting of the ribbon to mark the official launch of @iLabAfrica. This was performed by the Cabinet Secretary Dr. Fred Matiang’i. He was ushered by the VC of Strathmore, the Director of @iLabAfrica and CEO of Safaricom.

The event was crowned by the demos from Safaricom Academy scholars, startups at @iBizAfrica and developers from the Samsung-Strathmore Research Lab at @iLabAfrica. The guests were impressed by the innovations and startups showcased, with some startups sealing business deals on the spot.